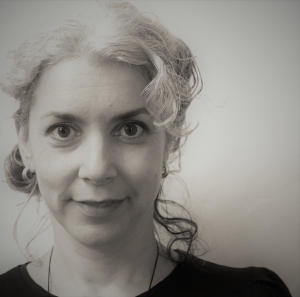 I grew up in the magical Black Mountains and moved to London when  was 18 to train to be an actress. Whilst appearing in theatre shows, doing bits of telly and a few films I also enjoyed careers as a waitress, a courier controller, a receptionist at a record company and a cleaner, and I could be regularly spotted on the number 73 bus with my trusty vacuum cleaner.

Returning to Wales, I worked with theatre companies and began to devise and develop shows and workshops for young people. In 2009 when I was quite old, I had my very first picture books published with Simon and Schuster.

There are now a grand total of ten Princess Evie picture books and four Evie fiction books for older readers. Princess Evie has been translated into seventeen languages including Welsh and Arabic, Norwegian and French and this year the series will appear in Mandarin!

2018 saw the publication of Being a Princess is Very Hard Work (Bloomsbury) which is very exciting and I’ve just started work with the wonderful team at Graffeg on my new book, A Cuddle and a Cwtch.

At the moment, I am at my desk developing another series for little littlies and drafting my first novel that involves a town trapped in time, black magic and bananas.

I live in the mountains with my husband, a musician and mad inventor, two nut maidens and a stripy cat who loves marmite.