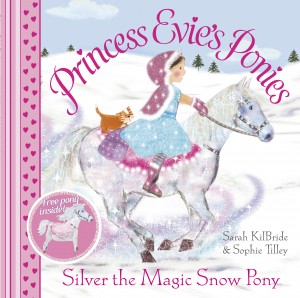 Princess Evie is crazy about her ponies. But Princess Evie’s ponies aren’t like any other ponies – oh no! Her ponies are magic ponies and, whenever Princess Evie rides them, she is whisked away on a magical adventure in a faraway land . . .
In this adventure, Princess Evie and Sparkles, the kitten, are whisked away on the back of Silver the Magic Snow Pony to a breathtaking snow-covered world. Here they help a lost little polar bear and go ice dancing with the snow fairies on Lake Perla.